This Day In History - THE ART OF DYING

It’s one year since the publication of THE ART OF DYING, the third book in the DI Westphall series. I’ve never actually seen sales figures for the book, which seems poor given that it was published by Mulholland/Hodder, but I don’t suppose sales were all that impressive. Maybe they made three figures; they certainly won’t have made four… Few then, are there, in the world of men, who will mark this anniversary. Good thing, then, that I’m here...

The Art of Dying is my favourite of my own books. Took the title from a great George Harrison song. When total strangers say, wait, what, you’re a writer, I had you pegged as a fence erector, which one of your books should I read? I say, The Art of Dying, and they go off and read something by Jo Nesbø or Hilary Mantel.

Here’s the one review (non-Amazon etc) that I can find online, from Shots Magazine:

This is the third Westphall novel from the prolific Douglas Lindsay and more than matches the standard set by its predecessors.

The setting, Scottish Highlands as a backdrop is evocatively realised. The bleak scenery serving to blur the line between reality and the phantoms of memory raised in the darker watches of the night - in a most unsettling way.

Westphall makes for a fascinating central character, a man haunted by his past. There is a tension between the crimes he investigates and those he committed with the sanction of the state that sings like a telephone wire in a high wind.

Lindsay ties off the ends of a plot featuring art forgery, financial chicanery and personal betrayals with the skill of a master of the Golden Age. Unlike them he does so without resorting to comforting clichés.

This is the sort of book that is so well conceived it reminds you why writing at its best is spoken of as being a craft. It also establishes Douglas Lindsay as someone deserving to be spoken of as a master.

That’s a pretty damned good review, by the way. That’s a keeper. A sticker on the front of books. (I already have.) But that was it. No idea if it was reviewed elsewhere. No idea who else Mulholland sent it to.

They had this vision of releasing the three Westphall books in seven months. Short and sharp, quickly build momentum, create an instant Thing. That was the plan.

By the time 22nd August came round last year, there was zero momentum. So they were releasing this third book into a void, with few having paid attention to the second, BOY IN THE WELL, three months’ previously.

And so, The Art of Dying, fittingly died. The senior editor who took me on at Mulholland left round about that time. The editor for the three Westphall books left a couple of months later. Even Jasmine, who handled Westphall events and publicity, left. And there went my connection to Mulholland, and some things that should not have been forgotten were lost. History became legend. Legend became myth. And for two and a half thousand years The Art of Dying passed out of all knowledge. (Only two thousand, four hundred and ninety-nine years to go.) 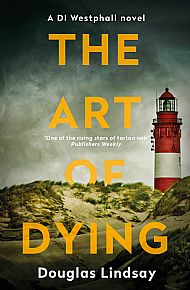 Last summer, I wrote the stand-alone crime novel THESE ARE THE STORIES WE TELL instead of a fourth Westphall – which I was already pretty sure Mulholland didn’t want anyway – and my editor’s final act was to send a note that she described as ‘bittersweet’. Bitter because they didn’t want my new book; sweet because she’d got a new job and was leaving.

At that point the hero – that’s me, at least in this story – looks side-eyed at the camera. I have bad news for you and good news for me isn’t bittersweet. Still, no bitterness here. I was grateful they took the series on after its original publisher, Freight Books, went down like the Hindenburg, but then it didn’t work out. As Jack Lemmon notes in The Apartment, that’s the way it crumbles, cookie-wise.

So, more than likely, no more Westphall, though I do have the better part of a novella written a couple of years ago, which I may one day get around to finishing. And The Art of Dying, will, I think, pretty much remain my favourite crime novel. It’s not going to get any better than that.

So, I shall raise a wee glass to it this evening. THE ART OF DYING, DI WESTPHALL BOOK 3, a year of dying artfully…

I don't really read crime novels (except Barney of course). Can this third book of the series be enjoyed as a standalone experience or do I have to make my way through the first two books in order to get it? I really want to read a book that you yourself describe as your best book but I can't stand / don't get the DCI/PI/PC/WTF police lingo stuff since I'm not a native speaker.
Thx

Markus,
Definitely OK to read as a stand alone. And though it's a police procedural, I'm really not that interested in police procedure, so I never get bogged down in it.
Douglas

Please note that whenever you submit something which may be publicly shown on a website you should take care not to make any statements which could be considered defamatory to any person or organisation.
Back to Top
site map | cookie policy | privacy policy | accessibility statement